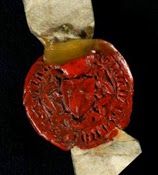 "England's Immigrants, 1330-1550" is a large new searchable database of over 64,000 resident aliens living in England during those years, containing information on names, nationalities, places of residence and origin, occupation and status.
According to the website:

it is evident from various sources that a remarkably diverse range of immigrants entered England during the later Middle Ages, from other parts of the British Isles, from the near-continent, and from other, more distant locations. It is also clear that these people were drawn from a far broader variety of social and economic backgrounds than just the upper echelons on which modern research has concentrated.

Researchers consulted "alien subsidy" records, license rolls, records of oaths of fealty, and letters of protection and denization, among other sources, to compile the database. A more thorough explanation of the sources used is provided on the website. Researchers have also compiled more extensive case studies for a few individuals and families when evidence was available. The site also contains a very detailed help section explaining the search parameters and outcomes.
The project is managed by the University of York, in collaboration with The National Archives and the Humanities Research Institute, University of Sheffield, and is funded by the Arts and Humanities Research Council. Personnel working on the project are listed here.