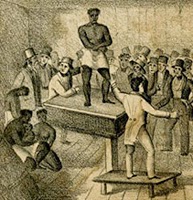 The McNeil Center for Early American Studies at the University of Pennsylvania will host a conference on “Human Trafficking in Early America” on April 23-25, 2015. From the conference website:

In early America, human trafficking took many forms, engaging and displacing native, African and European populations in every decade and in every colony and state. Drawing upon a wave of new scholarship on Indian captivity, the middle passage, the domestic slave trade, child abduction and sex trafficking, this conference offers a timely opportunity to examine the cultures and shadow economies created by and elaborated around forced migration in North America and the Atlantic world before 1865.

The program has now been posted; it includes a keynote address by Edward Baptist, entitled “Trafficking in People, Real or Derivative: The Second Slavery and Anglo-American Development.”

July 20, 2020
Business history and race: a partial, open bibliography The Business History Conference is working to facilitate the creation of a bibliography of scholarly work on race and business history. We hope that the bibliography will serve as a resource for those seeking to create more inclusive syllabi and understand the historical context for our present moment of reckoning with structural racism in the United States and across the globe. The bibliography is crowdsourced and draws on the collective expertise of the BHC membership. The BHC wishes to expand the list of references already curated and invites your contributions to the bibliography (The current list of references contains 154 titles). Submit your suggestions by (a) emailing additional references to Anne Fleming of the BHC Electronic Media Oversight Committee <acf80 at law.georgetown.ed> or BHC Web Editor Paula de la Cruz-Fernandez <padelacruzf at gmail.com>, (b) tweeting titles to @TheBHCNews or (c) adding it
Read more

October 09, 2020
Annual Meeting of the Business History Conference  Virtual meeting  March 11-13, 2021  Proposals due November 14, 2020  The originally agreed theme of ‘The Ubiquity of Business’ has been dropped. Instead, a new theme ‘Business History: Building for the Future’ has been developed. This year’s BHC annual meeting will be unlike any previous annual meeting as it will be a virtual one. It is hoped that this is only a temporary interlude from the standard get-togethers which we all value so much. However, it also provides an opportunity to be innovative. Four principles underpin our hopes for the annual meeting:  1. To assist graduate students and emerging scholars as a priority.  2. To make the conference as interactive as possible.  3. To regard the meeting as an opportunity to be experimental and radical.  4. To be as inclusive as is possible.  To achieve these goals the Program Committee have agreed the following in relaunching the call for papers for the 2021 BHC annual meeting.  The Pr
Read more