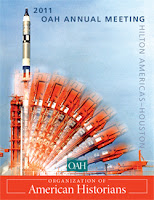 The Organization of American Historians (OAH) has now posted the program for its 2011 meeting, which will be held March 17-20 in Houston, Texas. Many full sessions and specific papers will be of interest to business and economic historians:
Thursday Sessions:


"History of Technology: State of the Field," chaired by Stephen Usselman(40)
"Out of Bounds: Expanding the Modes and Means of American Consumption, 1900-1965" (43)


"Work, Consumption, and the Question of Agency" (45)
"Eyes on the Market: Surveillance in the American Economy," chaired by Walter Friedman (46)
"Historians and the Public Interest: Agendas for the Study of Modern Political Economy," a discussion moderated by Edward Balleisen, with Kimberly Phillips-Fein, Neil Fligstein, and David Moss (51)


"Ten Years after the Enron Scandal: Historical Perspective on the Company's Origins and Growth," chaired by Naomi Lamoreaux and featuring commentary by Joseph Pratt, Margaret B. W. Graham, and Mary Yeager (56)
Joseph Pratt is also the guest speaker at the Urban History Association luncheon (58).
"The Triangle Shirtwaist Fire of 1911: A Centennial Remembrance," chaired by Alice Kessler-Harris (58)
"Political Economy of Empire in Colonial America" (61)


"The Intermediate Consumer: Expertise and Consumer Culture in the Twentieth Century" (63)

Other individual participants of interest here include Jeremy Atack (43), Tiffany Gill (59), Thomas O'Brien (45), and Tyler Priest (52).
Links to sessions cannot be provided, but those interested can find sessions by searching the pdf file or by going to the page numbers given in parentheses (note that the numbers refer to the printed pagination on the program, not the pdf page count).
Full information about the program and registration can be found at the OAH meeting site.