January 10, 2011
The European State Finance Database (ESFD), originally developed in the 1990s, has been recently relaunched in an enhanced form. The co-managers of the site are D'Maris Coffman, Centre for Financial History, Newnham College, University of Cambridge, and Anne Murphy (University of Hertfordshire). The ESFD is "an international collaborative research project for the collection, archiving, and dissemination of data on European fiscal history across the medieval, early modern, and modern periods." A full introduction and history of the project is available on the ESFD site.
The wide-ranging data, which are provided voluntarily by researchers, include such datasets as Herbert Klein's work with the Colegio de Mexico on the finances of New Spain, 1590-1810; "Annual Sugar Consumption in England, 1731-1780"; "Value (in francs) of cash reserves in the Banque de France, 1799-1834"; and many others. 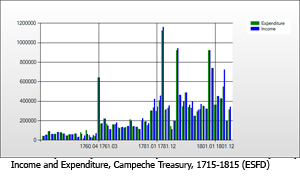 Data is presented in both graphic and tabular form, and the raw data and notes can be downloaded in various formats. Material is included on Austria, England, France, the Low Countries, Poland, Prussia, Russia, Spain, Spanish America, and Switzerland. The ESFD encourages new submissions and provides guidelines for those wishing to contribute.