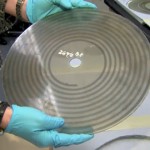 Researchers announced last month that they had been able to reconstruct some of the earliest sound recordings made by Thomas Edison, Alexander Graham Bell, and Emile Berliner, many of which are housed at the Smithsonian's National Museum of American History. Accounts of the details of the sound recovery project can be found on the Smithsonian blog, at its Newsdesk, which also provide sound files of some of the decoded recordings, and at the Lemelson Center website. Curator Carlene Stephens of the NMAH expects that the museum's collection of about 400 of the earliest audio recordings are likely to become a key resource for new research on communications and early technology. "These materials have been in a cupboard and virtually unknown for decades," she said. "The collection has been silent." Six files have been recovered so far, and the project is ongoing.
News coverage includes an extensive article in the Daily Mail; an NPR story, a slide show at the Washington Post website, and a Library of Congress press release. Readers can find the audio files and more technical detail at the Lawrence Berkeley National Laboratory, whose scientists worked with the SI and the Library of Congress to recover the sound from the early recordings. The audio files, which are very short, are also available on YouTube.
For those interested in exploring the history of sound recording, the Library of Congress's American Memory project offers a good starting point:


Emile Berliner and the Birth of the Recording Industry
Inventing Entertainment: The Motion Pictures and Sound Recordings of the Edison Companies