Labatt Brewing Donates Archives to the University of Western Ontario

June 05, 2011
Good news for business historians, as Ontario-based Labatt Breweries announced that it had given a major portion of its corporate archives to the University of Western Ontario, where the collection will be organized and maintained by the university's Archives and Research Collection Centre. Even more promising, the company also donated $200,000 to the university toward digitizing the collection. In the words of the press release: 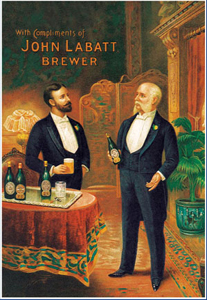 Until four years ago, the material Labatt had gathered since its founding – along with other materials acquired as a result of acquisitions of smaller Canadian breweries over the years – resided in thousands upon thousands of boxes, drawers and filing cabinets across the country. Amongst some of the collection, the artifacts include John Labatt’s personal letter book (1883-1906) containing company correspondence; a brewery book (1884-1895) providing details of daily production and year-end summaries; a stereoscopic slide viewer (1950s) used to train staff to identify aluminum can defects; draft minutes of the first Board of Directors meeting (1911); and the certificate of registration of the ‘Blue’ trademark. . . . The company, along with professional archivists, gathered, catalogued, itemized and organized virtually all its irreplaceable corporate documents.

Some of the materials, including images and TV and radio commercials, are available on the Labatt site. UWO has also placed some images on Flickr.

Tip of the hat to Andrew Smith.