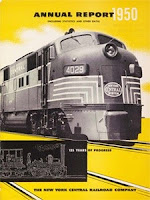 Business historians have a wealth of options for finding recent and current company annual reports; nearly all companies now post them on-line, and several services provide collections of such data (though access may require a paid subscription, either personal or through a library); see here for an international list. But finding historical corporate reports is not so easy; though many libraries hold them, they have not been a priority for digitization. Nevertheless, for the United States and Canada, a few libraries make digitized reports available:

In addition, Judith Nixon at Purdue University Library has posted a combined listing (not the reports themselves) of the reports held by Columbia, Cornell, Harvard, Massachusetts Institute of Technology, Purdue, Stanford, Alabama, California-Berkeley, Pennsylvania, Western Ontario, Yale, and the Science/Industry/Business Library of New York Public Library.
Proquest offers Historical Corporate Reports, which includes "42,000 reports from 1844 onward, representing over 800 leading North American companies." This database requires a subscription, but it is freely available to users at many college, university, and public libraries.
The Library of Congress provides indexes of the pre-1974 U.S. annual reports and 1975-1983 annual reports available there on microfiche.
For those trying to track down reports from companies directly, the on-line Directory of Corporate Archives in the United States and Canada, just updated and now maintained by the Association of American Archivists, is a useful tool.