Exhibit: “Show Me the Money” 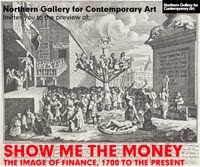 The exhibit "Show Me The Money: The Image of Finance, 1700 to the Present" has opened at the Northern Gallery for Contemporary Art in Sunderland, UK. The exhibit

charts how the financial world has been imagined in art, illustration, photography and other visual media over the last three centuries in Britain and the United States. The exhibition shows how artists have grappled with the increasingly intangible nature of money and finance from the South Sea Bubble of the early eighteenth century to the global financial crisis of 2008 and its aftermath. . . . As well as works in an array of media, the exhibition also reveals the development of an array of financial visualisations, including stock tickers and charts, newspaper illustrations, bank adverts and electronic trading systems.

This is primarily a physical exhibit, but the accompanying website has many images and a good deal of explanatory text. The exhibit will travel to other venues in the UK; please see the exhibit website for additional information. A book and an on-line video are also available. Curators are Peter Knight, Manchester University, Nicky Marsh, Southampton University, Paul Crosthwaite, Edinburgh University, and Isabella Streffen, Oxford Brookes University.