The Uses of Inventories: “Human Well-Being and the Industrious Revolution” 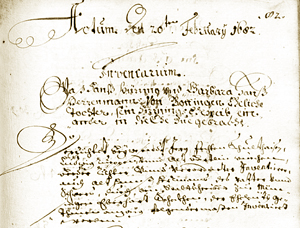 Sheilagh Ogilvie of the Department of Economics at the University of Cambridge is the principal investigator on an ERSC-funded project, "Human Well-Being and the Industrious Revolution: Consumption, Gender, and Social Capital in a German Developing Economy, 1600-1900." The project investigates consumption and well-being over three centuries through a microeconomic analysis of two communities—the town of Wildberg in the Württemberg Black Forest and the village of Auingen in the Swabian Jura. The heart of the project is a close examination of estate inventories from the regions. In the words of the project description:


How do consumption, production and reproduction interact to improve human well-being? The project addresses this question by exploring the theory of the ‘Industrious Revolution’ – the idea that after about 1650 Europeans shifted time out of leisure and household production into market work and consumption, thereby preparing the way for modern economic growth. The theory is supposed to apply to all of Europe, but is based almost exclusively on English and Dutch evidence before c. 1750. We aim to add substance to the Industrious Revolution by focussing on a Central European economy (the southwest German territory of Württemberg) where extraordinarily rich personal inventories survive from c. 1600 to c. 1900. By linking inventories with family reconstitutions and other local sources, we aim to create a database permitting a multivariate analysis of increases in market consumption and production, as a function of factors such as gender, marital status, fertility, age, occupation, local office-holding, literacy, landownership, credit relationships, kinship circles, community citizenship, guild membership, and other measures of ‘social capital’. The project thus aims to explore the determinants of changes in human well-being over three centuries by bringing to bear new evidence, new methods, and new conceptual tools.

The project, and the importance of the inventories, has been receiving significant media attention in recent weeks: see this article in the June 6 Boston Globe and a BBC interview with Ogilvie (beginning at minute 33); the University Cambridge also covered the project in a recent in-house publication about faculty research.

The phrase "industrious revolution" is probably most closely associated with Jan de Vries of the University of California, Berkeley, author of The Industrious Revolution: Consumer Behavior and the Household Economy, 1650 to the Present (Cambridge University Press, 2008) (see here for an EH.Net Review by Hans-Joachim Voth).