The Omohundro Institute: 2011 Program and 2012 Call for Papers

Several items of interest from the Omohundro Institute of Early American History and Culture (OIEAHC): 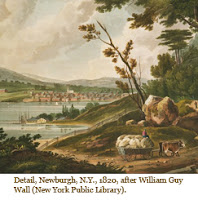 The Institute will hold its annual meeting June 17-19, 2011, at the State University of New York, New Paltz. The program and registration details are now available on-line. Presenters who also participated in the recent Business History Conference meeting include Kim Todt of Cornell University, who will discuss "The Migration of Dutch Women to New Netherland under Employment Contracts," and Joseph Adelman of Johns Hopkins University, who will speak on "Printers and the Representation of Public Opinion in the Revolutionary Media." Other topics of interest include the slave trade and mercantilism, pearls as an imperial commodity, New England-West Indies trade, Quaker poverty assistance, and piracy.
The Institute's call for papers for the 2012 meeting, which will be held at the Huntington Library in San Marino, California, on June 15–17, 2012, has also been posted, and suggests a strong economic history component. The program committee, chaired by Peter Mancall, indicates that it


will consider all proposals relevant to early American, Atlantic, and eastern Pacific world history broadly conceived. The setting of the conference near the shores of the Pacific suggests the special appropriateness of submissions related to oceanic history: maritime history; the long-distance movement of people and goods; the economic and spiritual encounters of Native Americans, Europeans, Africans; transnational identities; mapping and imagining America in a global and oceanic context; travel narratives; the environment and climate of the sea; fish, salt, whales, shells, and other oceanic products; island experiences and literature; and the creation of new kinds of communities. The program committee . . . particularly encourages submissions that examine long-distance movements through the Atlantic and the Pacific and the results of these voyages.

The deadline for proposals is September 15, 2011.
In other Institute-related news, Ellen Hartigan-O'Connor, 2004 co-winner of the BHC's Kerr Prize, will be presenting her work on "Women, Auctions, and Economic Power in Early America" at the upcoming OIEAHC workshop on Women in Early America, to be held May 26-28, 2011, at the Huntington Library. And finally, a reminder that the deadline for paper proposals for the 2012 "Political Arithmetick" conference is July 31, 2011.