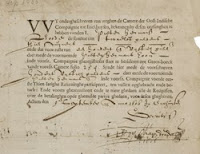 As widely reported in the press last Friday, Dutch graduate student Ruben Schalk, working in the West Frisian archives on research for his Master's degree at the University of Utrecht, found what appears to be the oldest share of Dutch East India Company (VOC) stock; the share previously thought to be the oldest is dated September 27, 1606, whereas the share Schalk found is dated September 9, 1606. The document will anchor an exhibit at the Westfries Museum running from September 10 to November 21, 2010, accompanied by a useful on-line exhibit providing historical details and a zoomable view of the share document.

Readers might also be interested in Larry Neal's PowerPoint presentation on "Venture Shares of the Dutch East India Company" for his course last spring at the London School of Economics. Neal, professor emeritus of economics at the University of Illinois, is currently a visiting professor at the LSE. He is most recently the editor, with Jeremy Atack, of The Origin and Development of Financial Markets and Institutions from the Seventeenth Century to the Present (Cambridge University Press, 2009).