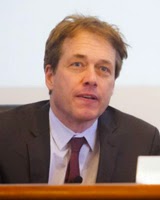 Sven Beckert, Laird Bell Professor of History at Harvard University, has been awarded a 2015 Bancroft Prize in history for his book Empire of Cotton: A Global History by the trustees of Columbia University. He is a co-recipient with Greg Grandin, a professor at New York University, who won for The Empire of Necessity: Slavery, Freedom, and Deception in the New World.
The official announcement called Empire of Cotton “a masterful achievement in the burgeoning field of the study of capitalism . . . an expansive global history that also helps us rethink the history of the United States, lifting our understanding of American slavery, cotton production, the Civil War, and Reconstruction out of the parochial confines of nation-centered history. Deeply researched across four continents and cogently argued, it is a book that will have lasting value for students of the United States and the 19th-century world.”
The Bancroft Prize is awarded annually by the trustees of Columbia University. Winners are judged in terms of the scope, significance, depth of research, and richness of interpretation they present in the areas of American history and diplomacy. There were 135 books considered for the 2015 prize.
Commentary on the Beckert book was listed in an earlier Exchange posting.